You are here
Home > ID@Xbox > Cult Classic Physics Based Puzzle Game King Oddball Coming to Xbox One and Steam on September 9th.

Multiplatform game developer 10tons Ltd. has announced that the cult classic physics based puzzle game King Oddball will be launching on Xbox One via the ID@Xbox self-publishing program on September 9th. The game will launch on Steam PC game distribution service on the same day. Preorder on Xbox One has already begun. The game is priced at a cheap $4.99 USD with a 10% discount during the launch period, bringing the price down to $4.49 USD. “King Oddball is weird, wonderful and addictive in the best possible way. It’s remarkable how entertaining single button gameplay can be,” said Tero Alatalo, CEO of 10tons.

King Oddball is a physics based puzzle game with a big emphasis on the puzzle aspects and player skill. The player, as the titular King Oddball, must clear each level of enemies such as tanks, helicopters and soldiers. Enemies are destroyed by hurling large boulders at them, and making sure each boulder crushes more than one enemy. The boulders are swung at the tip of King Oddball’s enormously long tongue, which swings back and forth in a pendulum like motion. The player must simply press a button to release the boulder. Finding hidden moustaches is also part of the game. 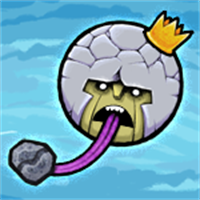 King Oddball is already available in PC through the Windows Store. The Windows Store version includes a free trial version for the game, allowing everyone to give this game a try before committing to purchasing it. As mentioned earlier, you can expect to see the game releasing on both Steam and the Xbox One on September 9th, 2016, for $4.99.